Behind new jobs numbers are very bad signs for the economy, experts say 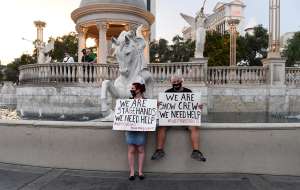 Waves of fresh furloughs are poised to hit American workers as companies wake up to the reality that the coronavirus is proving more intractable than they initially thought.

“The ‘V-shaped’ recovery is a mirage,” said Nick Mazing, director of research at data provider Sentieo. “We are seeing a permanent reduction in the size of several sectors in the economy.”

While the economy added an estimated 1.4 million jobs in August, according to Friday’s government jobs report, the number actually points to a slowdown in the recovery. The total positions added is below the 1.7 million job gains for July, and far below the 4.8 million added in June. job posting

The jobs report is based on a survey that is conducted during the week that includes the 12th of the month — but data that was collected after that period flashed warning signs for some economists.

“The inflection point in job postings is a red-light, break-the-glass, pull-the-parachute-cord moment,” she said. “It looks like employment may be flat, or even declining… it’s a very bad sign for hiring in September.”

“It looks like employment may be flat, or even declining… it’s a very bad sign for hiring in September.”

Company earnings calls during the second quarter saw a large spike in language around permanent job cuts, Mazing said, with mentions during July and August nearly double those during the financial crisis of 2008.

“The job market broadly is something like a whirlpool, where beneath the surface there are swift cross currents including job loss,” said Mark Hamrick, senior economic analyst at Bankrate.

“Many of the recent large company announcements regarding furloughs and job cuts have yet to hit, indicating that the economy continues to face challenges in the months to come,” he said. Airlines, in particular, are yet to implement the tens of thousands of layoffs they say will be necessary to rightsize the industry as travel demand remains at record lows.

Nearly half of businesses who have already made coronavirus furloughs or layoffs expect to make further workforce adjustments in the next 12 months, according to a new survey of over 250 human resources managers at a range of company sizes and industries by Randstad RiseSmart, an outsourcing firm.

“We all thought things would have resumed a little closer to normal now,” said Dan Davenport, president of Randstad RiseSmart. “A lot of companies are recognizing this is the new normal and this is going to be around for a while.”

Several factors may be driving the leaner outlook for employers.

Some companies are seeing demand hasn’t sprung back and are making the necessary adjustments. Some are accelerating existing workforce reduction plans. Others are finding that cuts they thought were temporary are actually sustainable, with productivity not falling in direct proportion to reductions in headcount. Other companies have found that remote workers are able to be more productive — with some even working harder, out of fear of losing their jobs.

Companies who spent the spring and summer in constant “wait and see” mode have started ratcheting future expectations downwards and are starting to make adjustments to make sure they stay in business, said Dante DeAntonio, an economist at Moody’s Analytics.

“It’s taken this long for some companies to sort through the longer-term impacts. Companies that were in a good position in March and April now realize they can’t keep all their employees,” DeAntonio said. “They’re realizing business is not coming back.”

There are some targeted bright spots. Truckers, tech, health care, homebuilding, outdoor companies and retail — for e-commerce and order fulfillment — are seeing growth.

But employees who thought they were safe because they survived the first round of layoffs at their company should look sharp.

“Employees should make sure they take stock of the skills they have and match those to the strategic goals of the company, and make their way to parts of the company that are growing rather than cutting,” Davenport said.

For those who want to invest in professional development, now even more critical as work from home has cut off some employees from much of the organic learning that would happen in a physical workplace, online training opportunities abound to buff up their skill sets.

“There are definitely a lot more opportunities than ever before. If you want to learn something there is something out there,” Davenport said, with accredited universities offering free or low-cost classes online and independent training sites that teach in-demand hard skills.

Melinda Theoc, a 42-year-old mother of three from Orlando, is one of those employees considering shifting her skills from an area of the economy hit hard by the pandemic to one that is seeing growth.

An employee at a department store, she’s seen her hours cut to just one day a week, sometimes just for two to four hours.

“I haven’t received my unemployment since June,” she told NBC News. To take care of her family, she has no choice but to try to get into a new career.

“I’m thinking about just going back to school for some kind of training to get a better job,” she said. “Like nursing.”